A great article about the current state in Haiti and finding hope in the strength and character of the people: Hope for Haiti's Future.
The author's description of the people is incredibly accurate. One piece of my story that I attempt to stress is that Haiti was the safest place for me, as a white person, to have needed to be rescued. The three men that pulled me from the rubble of the fallen building and drove me to the hospital had never seen me before nor did they expect or ask for anything in return. What's even more astounding is that, because I got to the embassy so quickly, it was impossible for them to have had the time to go to their own homes and check on their own families. They prioritized me.
So when the author describes the incredible generosity and spirit of the Haitian people, I have to agree.
But what strikes me most about this article is that, despite years of American international policy demonizing their only democratically elected president, training and funding dictators and insurgents, and U.S. business interests taking precedence over human rights, this quote is still possible:
"Surprisingly, many Haitians I've asked about the future say things will improve only if the United States (more specifically, former President Bill Clinton) is put in charge."
I'll be the first to give props to Clinton and George W. Bush for their recent work in Haiti, although one wonders if it comes from a place of guilt, but that's another matter. What's important is that with president Préval announcing that elections will be held in Haiti on November 28th (which we pray aren't as laden with controversy as five years ago, especially considering I'll be returning within a few weeks of the elections), Haiti is (hopefully) taking steps to prove to their international funders that they won't let the elections slide even in the face of the earthquake. Probably a smart move considering that Haiti without international aid=move nouvèl yo. Bad news.
It's hard to find hope in a country that literally wants to give up and let somebody else run the show. But it's the people like my rescuers and these little ones that makes finding the hope possible.... 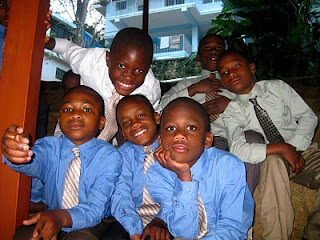