Unlike my Haitian friends, I'm not a particularly superstitious person (not that I'm equating Voodoo culture to pure superstition, I promise). But lack of superstition notwithstanding, when I want something so badly that I lie awake at night making elaborate plans, anticipating conversations, plotting trajectories and literally dreaming about it, I don't want to jinx it.

But like many big and potentially impactful things, my dream is going to take some help, encouragement, and guidance to achieve. So I thought I'd throw it out here and allow those interested to follow my progress toward starting a full-ride scholarship for Haitian students who grew up at NPFS to get their degree at the University of Portland.


Whew. I said it. Universe, please don't let this be a jinx.


So here's how this whole idea came to be:

I met a very nice man at the State of the University luncheon (read article about it here, gives away the name of my potential donor but at least I didn't spill it...) that honored Molly with an alumni award. He is a scholarship donor for UP and gives 4 scholarships per year! This year, he added 2 more full-ride scholarships (worth $250k) to be named after Molly. He's also a long-time supporter of Friends of the Orphans. Obviously a wonderful generous man, and that's even before I met him.

At the luncheon, I was greeted with a huge bear hug and amazing compliments about my graduation speech (he still remembered it!), condolences, and lots of love. He also offered to me (without me bringing it up) that a dream of his was to bring Haitian students to the U.S. to get a Catholic education.

Fast-forward a few months. Having mulled it over for awhile and attempted to get in touch with some people involved at the orphanage, things are finally underway. (I was also inspired by the amazing efforts of the UP class of 2010 to raise money for a scholarship in Molly's honor).

The first step was talking to Robin from NPFS about their hopes for who would benefit- her hopes were either for an employee they have that needs to finish former social work training (his University fell down in the earthquake), or if not, kids from the St. John Bosco program. This program takes kids who grew up in the orphanage and supports them through secondary school. They either live with extended family and receive stipends from NPFS for food, school supplies, etc. or live in a house together that NPFS rents if they have no family. Robin mentioned that, out of the hundreds of NPFS employees, there are certain to be a number who are interested in an education, but she prefers to keep it in the family with kids who grew up in the home, unless there aren't any that are ready.

The next step involved me getting excited but super nervous to talk to the bigwigs at UP about this. I was going to toss the idea around with some people at UP, but a very wise friend told me that since I know the president personally, there's no shame in going straight to the top. Of course, this also meant that if Fr. Beauchamp shot me down, that would be the end of it.

But he didn't. I had a conversation yesterday in which Fr. Beauchamp said I had a good idea and referred me to more appropriate Vice Presidents (whom I also know personally, gotta love family connections!) to talk to them about fundraising and approaching the donor. Fr. Beauchamp did say he'd prefer to fund the scholarship internally, which means no outside fundraising and approaching the donor I have in mind, which is less work for me and ideal.

Now for the next step. Before my talk with the VP on Monday, I need to get a better idea of how things would work on the Haiti side. My goal is to have at least 2 scholars for the first round (Fr. Beauchamp indicated that he'd support continuing this for more than one year!) so they have each other to support through the process. But Haitian scholars obviously need more support than their American counterparts- we would need to fund them before they even arrive to study for and take the TOEFL (and if they don't pass the money might be in vain which is a huge issue I'm struggling with right now), pay for their transportation to TOEFL classes, help them get their Visas, pay the fees, buy their flights to the U.S., etc. So this will obviously take a lot of cooperation from NPFS, even after they help to identify qualified scholars who are done or finishing secondary school, speak some English, could take the TOEFL, and are even interested in this opportunity.

So yeah. Lots to do. Lots of worries. What if nobody qualifies? What if the donor doesn't come through? What if he doesn't want to support the scholars until they arrive- who will pay their Visa/testing/housing/transportation fees? Is too much of the burden going to fall onto NPFS who already has enough to worry about? What if nobody even wants to leave Haiti to study in Portland? Is this sustainable for at least four years? Where would they live? Would the cultural adjustment be to much? Should we limit what they study to engineering/nursing/practical degrees they can use instantly upon their return to Haiti? Lots of questions. We have a lot to do, but like I said: I am living and breathing this and I'm gonna make it happen.

Hopefully with help from this man: 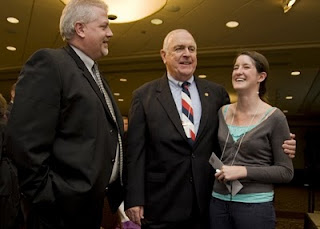