Hello to all and Happy New Year! In Haiti the end of 2010 is being rejoiced, more so than the beginning of 2011. I get an idea that the entire country has a Good Riddance 2010 mentality and I´ve noticed that same mentality among the volunteers. I can share in that sentiment. Orevwa 2010!

Anyways, we´ve spent the last 3 days relaxing at the orphanage in Kenscoff. Because it is Christmas holiday for all of Haiti, not much down in Tabarre at the hospital is happening, so we felt fine taking a few days to relax and spend with the children. I also am still struggling to overcome this nasty cough so I thought it best I didn´t spend a lot of time in the cholera area, which I still hear is doing well and actually seeing fewer patients each day. That´s good news!

The last few days have been relaxing but we still got a lot done. I feel like Doug and I have probably met almost 400 children, although I´ll be the first to admit that I´m horrible at remembering their names and faces. We set out to make videos of about a dozen children to send to their godparents in the Northwest region, and I thought it might take quite some time to track these dozen kids down, but news travels fast in Kay Helene. We sent a list of names with one enthusiastic adolescent and within a couple hours he had tracked everyone down for their minute of fame on Doug´s camera.

The highlight of the weekend for me was meeting my godson, Kervenson, and my mom´s godson Jeff (although they call him by his last name Egalite because there are so many Jeffs here. I can attest to this, having met about 4 Jeffs already). 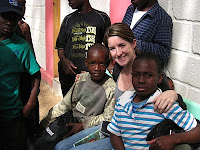 Kervenson is on the left and Jeff on the right with the striped shirt. We brought them each a backpack of toys and school supplies and it was a huge deal. Kervenson is super shy (I assume this comes from his recent history of abuse in the tent camps after both of his parents died in the earthquake) but he is precious. He kept wiping his eyes and looking away when I gave him all his gifts. I think he was overwhelmed by the attention that he didn´t expect. Jeff is more of a cool customer but still loved his gifts. Both boys were great about sharing their presents with their housemates, and I saw Jeff´s slinky in Mass this morning being played by a completely different group of kids. Everything is pretty much shared here. 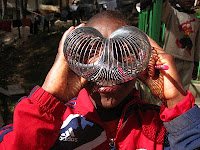 The slinky didn´t actually work as intended since all the stairs here are too wide, but the kids found many ways to play with it. 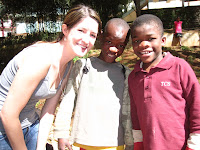 Me, Kervenson, and friend enjoy the sun and watching a group of boys play soccer. 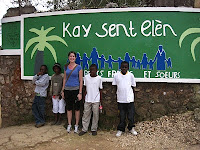 With Jeff, Kervenson, and two friends in front of the sign at the main gate.
Yesterday we took Jeff and Kervenson on a hike up the mountain nearby (didn´t quite make it to the top and I don´t think either of the boys were super excited about slogging up a mountain with two white strangers) but we made it up to them by buying them each a coke at the little shop down the street and that went over super well. Jeff told me Mil Mesi (a thousand thank yous) and it took them each about an hour to drink it. We gave them packs of pencils my mom brought and it was super cute to watch them share and trade with their friends.
The biggest parts of this weekend for me have been conversations. It´s incredibly difficult to convey how much it´s meant to me to sit down over tea and talk for hours with people who lived through the earthquake. I´ve learned new things about the hours after the quake as well (such as no rescue crew from the U.S. or anywhere ever got to our building. It was the volunteers and boys who grew up in the orphanage, as well as complete strangers, who dug Molly, Ryan, and Erin out of the building) and about Erin´s journey to the U.S. But more than just filling in some blank spots, this has been the first time in almost a year that I´ve been able to stop feeling alone. I have wonderful supportive friends, but it´s not quite the same as talking with others who can relate in a different way. In this way, this trip has been exactly what I needed.
I feel very much at peace here.