City of the Sun

I find it ironic that the worst place that I have ever been is called Cite Soleil, or City of the Sun. For us northwesterners who are normally subjected to copious amounts of precipitation and grey clouds, the sun conjurs up images of a warm source of growth. But in Haiti, the fact that the awful slum is named after the sun makes sense. Here, the sun cracks and burns and withers everything under it. For a place where almost half a million people live in abject poverty, a place that was once named the most dangerous place on earth before the UN intervened, a place where gangs may no longer roam the street constantly but rape, murder, looting, and kidnapping are still common, a place where sewers and schools don't exist, the image of the Sun makes sense.

Every day, the rainbow-colored Mack truck leaves St. Luc to make three water runs to Cite Soleil. Our driver Dimanch and two other helpers accompanied us, and even without the last water run, we were still under the Sun for almost six hours.

I wish I could have taken pictures driving through the main road of Cite Soleil, but being crammed into the cab with three other people made it difficult for me to stick my camera out the window. But pictures wouldn't do it justice anyways. A picture can't capture the smell of a mixture of human waste, burning garbage, and gasoline. The miles of shacks built out of a hodgepodge of corrugated metal, cardboard, and scrap wood wired together don't come out as pathetic on film. We crossed multiple bridges spanning "rivers" that were just wide ravines filled with garbage; goats and pigs (and sometimes humans) scavaging through the waves of trash.

Sometimes the water delivery got a bit tense. Salut worked crowd control when women or children who had stacked multiple buckets got to the front of the line and proceeded to unstack them; this delaying of the line felt unfair to some people. Children constantly shouted "Hey you!", their only English words, and climbed over the bucket line to come tug on my hand, pulling and pulling, to ask for their photo to be taken or plea for food. The only time I have regretted learning Creole was yesterday; the pleas for food are much more heartbreaking when you can understand them.

I'm not proud to say that after four hours I was exhausted. I could blame a recent sickness and lack of sleep and skipping lunch, but I'm pretty sure I just shut down from too much noise, heat, and suffering. I sat on the top of the Mack truck on the second water run to avoid the tugging children reaching for my camera or watch. After only four hours, the despair was too much. Imagine struggling through an entire lifetime in Cite Soleil.

Sometimes the Sun can be very cruel. 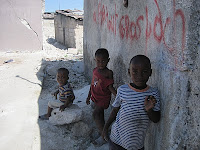 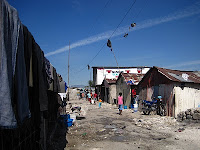 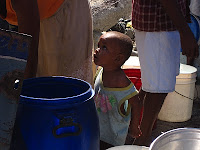 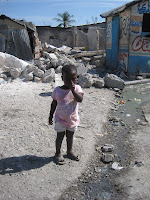