It happened. The inevitable. I fell in love in Haiti.

Don't worry parents. Not to a Haitian man. The last few weeks I've fallen for a baby named Sabienka. Sabi lives in the abandoned babies room in the hospital. She is beautiful. 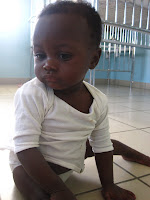 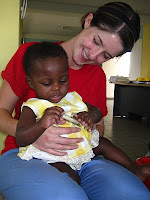 There is a room in the main hospital with ten children from age two months to age five that were left here. Sister Lorraine goes almost every afternoon to play with the two older girls and teach them letters and give them a little education and play time. She also interacts with each of the other children, five of whom have mental and physical disabilities, some more severe than others (Such as the baby with severe hydrocephaly who cries in pain almost constantly. Heartbreaking).
There's a reason why they call it "falling." It hurts. The other day I held Sabienka and rocked her and had the first real cry since I've been here. I stayed to myself in the corner by the window but the nurses must have thought I was a bit crazy. But it's just so unfair. Who would abandon such an adorable little thing? Our orphanage is full, so eventually social services will probably come take her, and in Haiti, that's never a good thing. I have no idea what might happen to her, or any of the children in the abandoned babies room. The nurses do their job to an extent, but yesterday one of them was content to let Jonackson cry in his crib with a wet diaper while she read a magazine.
The first day we visited, Sabi was quiet, shy, and a bit indifferent. Now she smiles every time I come in the room and reaches her little arms out to me and squeezes her hands in a grasping motion to indicate that I pick her up. She pats me when I pat her back. She cries when I leave. I know I'm only twenty three and have had relatively little heartbreak at relationships ending, but I would gladly trade that for how unfair and painful it will be to say goodbye to this little baby.
A friend told me the other day that it's good; Sabienka makes me feel alive when the rest of the time in Haiti I feel a bit numb to everything. He's probably right. I hope everyone has that in their lives; something to make them feel human when the rest feels overwhelming and you want to withdraw. But that doesn't mean that it isn't hard.
To end on a more positive note, the promised photo of Doug at his first tea party with Rose Berlin and Philomen, the two older abandoned girls. Too cute. 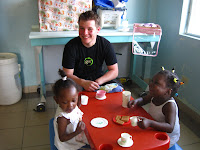 We'll be at the orphanage this weekend so I'll write again next week. Happy Friday everyone!