I've spent the last two mornings in the rehab center, Kay Germaine. After the earthquake, Kay Germaine added a prosthetics program and an adult rehab program, adding them to their current pediatric rehab program, multiple schools for kids with disabilities, and a program where mothers who have kids with disabilities make handmade cards to earn some money. 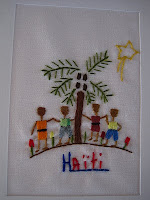 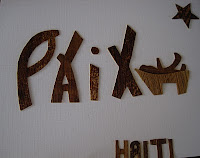 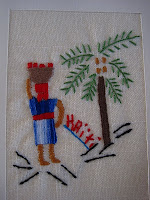 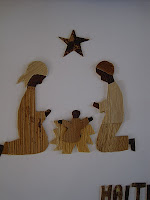 So if anyone wants handmade cards (embroidered, banana leaf, or both), let me know. They're made with love and cost $3 U.S. each. Usually each woman can make between 4-5 per day. I have enough U.S. Dollars to buy some if you want to e-mail me at RAPrusy@gmail.com with a promise to pay me back :)
Because I haven't taken any pediatrics yet, I'm much more useful in the adult therapy room. There is no physical therapy training available in Haiti, so Norma has just trained each therapist as much as she can on her own. They're great at range of motion, massage, some exercises, etc. but they really have no idea how to diagnose, they always think everything is about muscle tightness (for example, I had to struggle through a Creole explanation that a woman's antalgic gait wasn't due to trunk tightness on one side, rather it was due to pain and consequently glut med weakness. Anyways, boring stuff for non-physical therapists...) But they are eager to learn and very attentive to their patients. Today, Norma was gone, so I ended up being a sounding board for a lot of their questions. Towards the end of the day, they just started handing me the chart when the patient walked in. Talk about faking it til you make it.
Besides my general lack of knowledge and experience, adding beginners Creole skills to the mix made for an interesting morning. But I was able to help treat a patient with a stroke, multiple patients with fractures (very common after the earthquake, and usually very complicated. This was hard given my lack of experience but at this point, anything helps), and interestingly, an older woman with a gunshot wound to her thigh. Apparently the bullet wasn't still in there, at least that's what I gathered from my Creole questioning.
The craziest story so far was yesterday when a 77-year-old man arrived from the St. Luc hospital next door with a diagnosis of Ankylosing Spondylitis causing his leg pain and spasms. First of all, AS is adolescent-onset and the man was 77. Red flag number 1. Second, his pain patterns didn't fit any dermatomal or nerve pattern. Third, he hadn't walked since about February. Fourth, his house fell down in the earthquake. Fifth, no real back pain or stiffness that definitely would come from having a spine that looks like bamboo. Etc etc.
Norma and I discussed the misdiagnosis and how he suddenly stopped walking just weeks after the earthquake. He was able to complete full-range knee extension and hip flexion while seated, so we knew he could probably walk. So up he went with a little encouragement! We had him walking for almost 50 meters and gave him a walker to use at home. Amazing how trauma can mess with someone's mind. My first supratentorial problem.
Today also brought a young girl with a broken arm rigidly fixed at 90 degrees. Her mother insisted she had metal in it and she'd had surgery after it had broken almost 2 months ago. I tried to check her range of motion and the girl flinched and her mother was on top of me instantly, telling me not to hurt her, etc. Overbearing mother was probably reason #1 the girl never moved her arm after surgery and now had it locked completely. I tried to explain that if it was broken, the bones had probably already healed in this position after two months... so frustrating. But we wanted to make sure, so I walked over to the hospital with two of the therapists to look at her x-ray just to find out that there was no metal or even a fracture. It had been dislocated and the doctor had put it back in place, but since the mother never made her daughter move her arm since it hurt, it had gotten stuck. Reason #2 the girl had never moved her arm: the doctor probably never told her to, considering he also never explained it wasn't broken and they never had metal put in. Now they have to get a surgical dislocation. It was a confusing afternoon. Haiti is complicated.
Email Post