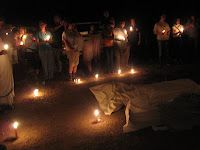 Today has been a day full of gratitude that I am in Haiti on the one-year anniversary of the earthquake and Molly's death. I'm so thankful to be surrounded by a community that understands. It also puts things into perspective to be surrounded by others who may have lost more than I did or suffered more than I did. For the first time in a year, I don't feel alone in this.

Last night we drove out to Titanyin, the site of the mass graves of the earthquake victims, bringing the bodies of two cholera victims to honor and bury. When we pulled into the clearing, we saw that the hills above were on fire with thousands of brush fires lit to honor the day. It was eerie but the thought that hundreds of people were out there beyond the flames, honoring their dead like we were, was comforting.

This morning we drove into Port-au-Prince. I saw the collapsed National palace behind rows of tents and shacks. Haiti is full of contrasts. 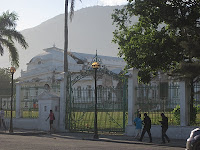 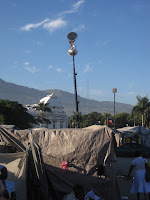 Then we parked near the collapsed cathedral in downtown Port-au-Prince to attend the main memorial mass, with all of the fancy bishops and even the Cardinal in residence. At first we were near the front, but the media cameras shoving their way through took the meaning out of the event for me. Incredibly frustrating and contrasted with the screams and shrieks of mourners in the crowd. One thing I will take from today is distaste with the media. One woman was entirely prostrated on the ground, crying, and news cameras were in her face. I couldn't take much more of it, so we looked up to see our friend Conan standing up in the balcony of the ruined cathedral, overlooking the ceremony from above. And we decided to join him. 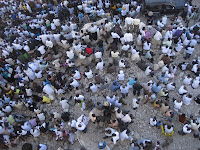 From the cathedral balcony; faithful sitting in the rubble listening to the Cardinal speak.
Climbing up the tower of a cathedral that is largely rubble (in a skirt, no less) was a bit of a challenge. Near the top, the stairs disappeared to be covered by rubble and exposed rebar. At one point, I definitely had to push myself to continue, given my fear of unstable buildings (understandable fear, but frustrating nonetheless). But we hoisted ourselves above the last few feet of steps onto the higher level and had some pretty astounding views of the crowd, but better was the experience of being in the cathedral. 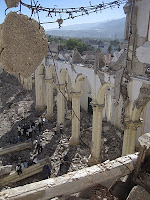 I climbed over all of the rubble and picked up a few shards of stained glass to take with me. Tomorrow I will visit the site of the Fr. Wasson Center that collapsed on me, but all of the rubble of that building has been cleared. In a way, I wanted to take a piece of the ruins with me, and the cathedral glass is a way for me to remember. 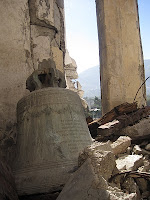 The other tower couldn't be climbed because a bell had fallen and was blocking the stairs, but I accessed it from the other side. 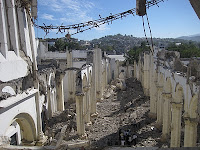 Pieces of metal and cement continue to just hang and swing through the air. Groups of children escort tourists (and mostly news cameras) up the stairs in hopes they'll receive a Gourdes or two. 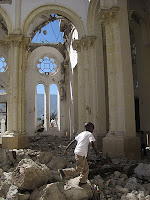 Down below, a child runs through the ruins. 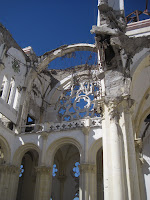 We climbed to the railing above.
Pushing myself to enter a ruined building, climb up to the upper level, and even look over the edge has been what the anniversary of the earthquake will mean to me forever: facing my fear, living my life without expecting something awful to happen like it did one year ago today. I'll never forget it. The earthquake, losing Molly, and getting through this last year has taught me that I absolutely cannot live with regrets. When people question or worry about why I would want to come to Haiti and put myself in danger (which, honestly, hasn't been an issue at all, as I knew it wouldn't be), I can't help but pity others who hold themselves back from experiences due to fear. I understand being cautions; life is precious. But life is also short; sometimes cruelly so. Being in Haiti today, and being in Haiti during the earthquake, will never be something that I regret.
After the cathedral mass, we drove back to the hospital to have one of our own. Molly and Ryan's names were in frames in front of the alter and we remembered them. We will never forget them. Nou p'ap janm bliye.
Email Post