I don't want to die today 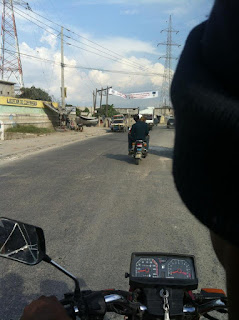 I am so grateful for the way my brain works. I'm blessed with the ability to pick up languages quickly, and apparently store that knowledge despite not using it for a year at a time. With each day that I'm back in Haiti, I gain more confidence and expand my Creole vocabulary. I certainly have a long way to go, but the ability to communicate in even a limited way expands and strengthens the value of my experience in Haiti. 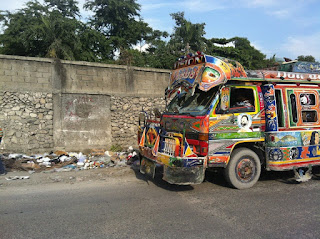 Creole came in handy yesterday when I was lucky enough to go with another volunteer and her Haitian boyfriend on my first motorcycle ride in Haiti. We went to a nearby artisan village, Croix de Bouquets, which is famous for Haiti's traditional metal work. I've been surprised and delighted to find Haitian metal art in boutiques in the states, but buying directly from the artisans themselves is not only more fulfilling, it literally decreases the price of the items by at least 400% if not more. 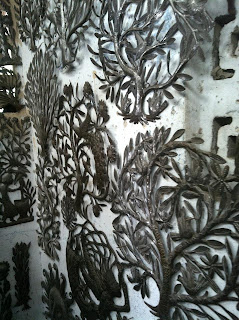 The security guard at Kay Germaine, the special needs facility where Molly worked, likely weighs in at 100 pounds, is at least a head shorter than me, and is missing quite a few teeth. Yet he takes the safety of the volunteers very seriously, and he made sure to take down the license plate numbers and names of our moto drivers to dissuade them from trying anything unsavory. Haitians never cease to delight me in their concern and fascination for foreign visitors. 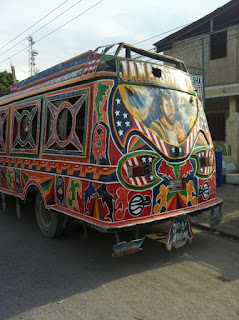 The motorcycle trip was not for the faint of heart, with the bike coming within inches of semi trucks and a narrow miss from a Red Cross vehicle that almost took out our back tire. Exhaust and dust from the roads coated me with a thin layer of grime that was apparent on the lenses of my sunglasses. The physical therapist in me cringed at the fact that our drivers neither wear helmets nor provide them for their passengers. The route provided fun glimpses of so many colorful tap-taps, the Haitian version of public transportation; each van or truck personalized with a rainbow of designs and murals of everyone from Jesus to the driver's wife to someone who looks a lot like Mr. T (see above). Despite a few close calls, my driver, who bore an extremely entertaining resemblance to Dennis Rodman, got me to Croix de Bouquet safely and stayed until we were done shopping so he could return me back to the fastidious security guard. 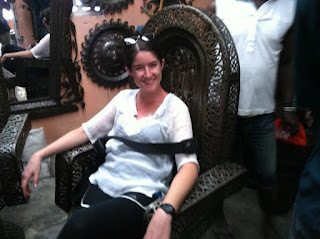 I am a sucker for artwork, and the stalls overflowed with beautifully carved and pounded metal pieces that the artisans make out of oil barrels. I was blown away by an entire dining set with intricate throne-like chairs. The artist told me it took him 6 months to complete.

Unfortunately, I was limited to purchases that will fit in a duffel bag on my way back to the U.S., but I'm excited to share some of this art with family and friends as Christmas gifts. I also received a free bracelet from an artisan I supported and an offer for his phone number just in case I return to Haiti and want to become his girlfriend. I awkwardly declined but assured him I will enjoy his beautiful work.

This was one of my favorite outings I've had in Haiti, and I started it off by telling my driver Dennis - using my Creole I'm grateful for - "I don't to die today." I was satisfied by his response, "I don't want to die today either."
Email Post