I was honored to be asked by Seattle's Young Professionals International Network (YPIN) to plan an event around Haiti's four-year earthquake anniversary.

The event took place last night and I was blown away by the attendance, audience questions, and insight from my fellow panelists: journalist Ansel Herz, who provided much-appreciated expertise on everything Haiti, and Jean Francois, who blessed us with poignant Haitian perspective. 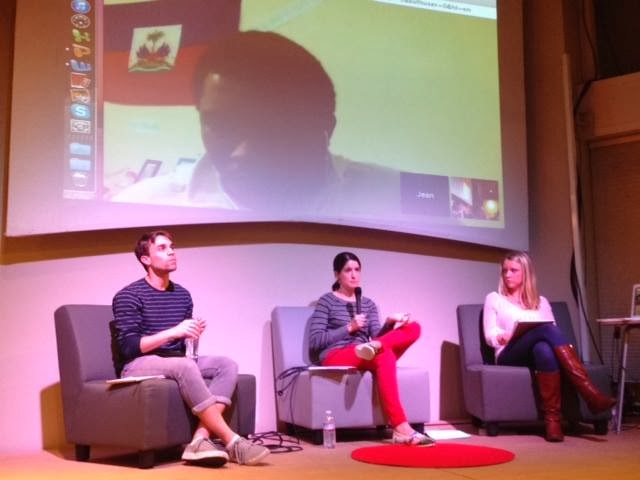 After much discussion on the failures and corruption of the international relief effort after the earthquake, Ansel brought a U.S. House bill to our attention that will allow for more transparency and require more accountability for the Haiti relief effort. Click here to track the bill and contact your congressmen to show your support for increased accountability for Haiti aid.

I wrote an honest account of my earthquake experience and I'm grateful for everyone's support in sharing a difficult story. You can read what I shared after the break.


When I tell my earthquake story sequentially and matter-of-fact, I find that it never fully captures why and how the earthquake changed me so entirely, because truly, how much impact can thirty seconds have on a person’s life? But it wasn’t what happened in those thirty seconds that has influenced nearly every decision that I’ve made since. It’s where those thirty seconds happened. It was Haiti, not the near-death experience or the fear or the PTSD.

Haiti has shaped me. Magnificently, hugely, from top to bottom. I has turned me inside out and exposed my most terrible and beautiful parts. Haiti gave me my biggest sources of pride and moments of greatest disappointment in myself. Haiti continues to squeeze a sense of adventure out of someone who will always struggle with an irrationally high level of fear in the unknown. Haiti has brought me my life’s moments of greatest terror and loss, but also opportunities to witness small miracles and be part of something massive and messy and human.

My twisty, beautiful, uncomfortable relationship with Haiti all starts with Molly. Molly was my apartment-mate in college. If we’re being honest, she was the last person I would have expected to move to Haiti, considering we had bonded over trashy television and she was apt to miss her morning classes and make Taco Bell runs after midnight. But she had a family history of service in Haiti and she surprised me and went, to work with an organization called NPH in their programs for children with specials needs. She thrived in Haiti and I was so proud of her. I planned a trip to visit her during my holiday break during my first semester of grad school, and we spent twelve days caring for kids, taking tap-taps, climbing monuments on donkeys, and toasting the new year on the top of the Father Wasson Center, a six-story NPH administration building housing volunteers and day programs for special needs children.

That building is a parking lot now. It collapsed at 4:53 PM on Tuesday, January 12, 2010. I was on the top floor, next to Ryan, who was visiting his sister Erin, Molly’s fellow volunteer. Ryan had been in Haiti all of four days when the shaking started. A nice hotel was being built next door and at first I thought the construction we had heard all week had caused a more severe rumble. I didn’t even have time to run before I knew it was much more than that.

I woke up immobile with blood pouring into my eyes. The top floor had cracked in the middle and the building had pancaked and I must have been somewhere on the top of the stack because light was visible in the top left corner of my vision. I was trapped and that mantra: “this is not okay this is not okay” was all I could muster through my brain before I blacked out again.

My fuzzy memory returns while being ushered into the backseat of a stranger’s truck; three Haitian men giving me a cloth for my eye, I turn to look out the window and the sight of me makes a Haitian woman on the street faint. My brain switched on enough to pick a foreign language: Spanish: to try to ask three Creole speakers about what happened. I know enough French to realize it wasn’t just our building; the destruction is at least city-wide.

Molly was still inside. I didn’t know Haiti, I didn’t know Molly’s organization or if anyone would come for me, and I didn’t know how I would get home, my arm is broken, my scalp hanging open. In that moment I made a decision I’m not proud of, my brain loosely forming connections, my mind still half-functioning. They wanted to take me away from there and I let them. I left her.  Molly had pointed out the US embassy on our tap tap ride the week prior. This memory of her comes in through my fuzziness and I tell them to take me there.

I am the first injured survivor at the embassy. US Citizens in various states trickle in throughout the night. I sit on the outside patio because the aftershocks are terrifying and I refuse to go inside for more than a minute or two to grab gauze and bandages and iodine. An administrator employed by USAID wipes up blood and dirt, and I direct my care, forcing a man to extract glass from my feet with tweezers to avoid infection. He’s no medic but I’m adamant and he pulls it out. A doctor comes later and stitches my eye, I create a sling out of something for my left arm and cut my torn pants from my bleeding legs. I’m not fuzzy anymore so the embassy calls my parents and I call Molly’s cell phone. Over and over but not too many times because I don’t want the calls to kill the battery. I watch the CNN coverage of the earthquake on the embassy’s TV and send reassuring e-mails to my family and friends. I call Erin and Ryan’s father, telling him that while Erin was downstairs, Ryan was right next to me. He has to be ok. I call Molly again. It rings and rings.

My USAID caregiver gets me on a helicopter to Guantanamo Bay the next morning. I am ambulatory but injured and thus can squeeze onto a back seat, gingerly stepping over stretchers with other less lucky survivors.

I hear my dad’s voice on CNN from my GTMO hospital room after the nurse tells me maybe I should turn off the TV. He is telling them where I was, hoping international rescue crews will find our building. I didn’t know that NPH employees and volunteers had already been there for hours. They found Ryan, but he didn’t make it. I feel terrible guilt for reassuring his parents. But they rescued Erin, buried a floor below. No word on Molly, whose bedroom was two floors down.

I sleep fitfully and try to negotiate my exit from GTMO. The evacuation from Haiti was easy, but civilians don’t qualify for free evacuation from Guantanamo. They want to charge NPH over $11,000 to fly me out. My dad and I try to find another way. A generous soldier has his wife bring me clothes since they cut mine off when I arrived on the stretcher. Every time I close my eyes I feel like I’m falling.

The next morning, someone else had room on their air ambulance so I am transported to a hospital in Florida, where I meet a family friend. My mom flies in and meets us as I am on the phone with Wolf Blitzer. It’s surreal and she’s crying.

The next day, Friday, we fly home. We touch down and my dad calls. They found Molly’s body that morning.

A few days later, I started my second semester of graduate school.

I spent the next year being sick at my ineptitude to help, and missing Molly desperately. I still do. She was the best person that would have understood both the earthquake and my ongoing need to be connected to Haiti. I returned a year later and every year since. My relationship with Haiti has grown into something different entirely than Molly’s Haiti or the earthquake itself, but Molly was my springboard and inspiration. I am always uncomfortable when people consider me inspiring, but I think Molly would have relished it.

So. I’m not an expert on Haiti but I have begun to understand its spirit and complexities and I am grateful for the opportunity tonight to share those with you.